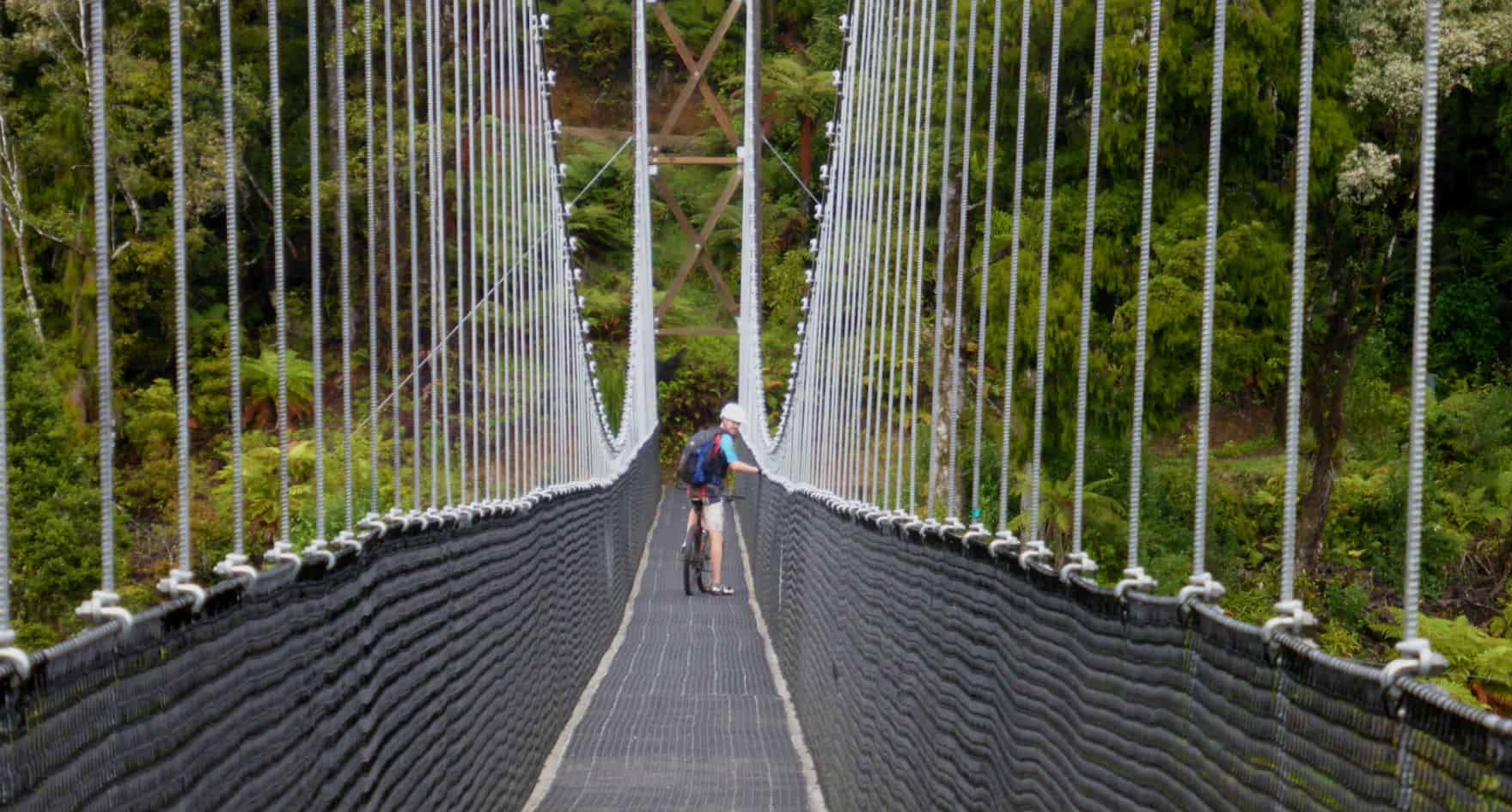 The Timber Trail is a classic 2 day ride (or 1 day if you’re keen) through fantastic native bush. Partly following an old tram trail and crossing many impressive swing bridges. In fact crossing one of New Zealand’s longest swing bridges.

We wanted to take our time, enjoy the bush. Also we wanted to stay at the Black Fern Lodge near the half way point. So we took 2 days. We were also joined by two of Adventurers mates to make the ride even more fun!

Our favourite shuttle company Blue Tui Shuttles picked us up from Ongarue (the end of the trail) where we left our car. We figure it’s best to ride back to your car to maximise flexibility and take away that having to ride back for a certain time stress.

The shuttle takes about an hour, winding along a fairly rough but pretty road to the start of the trail. You really are in the middle of nowhere here!! 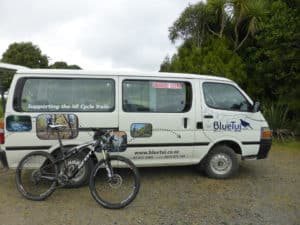 Blue Tui Shuttles dropping us off at trail head 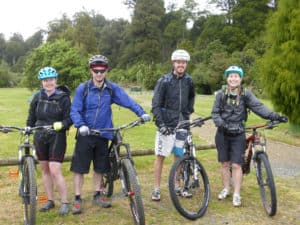 Adventurers about to start the Timber Trail

As we started the trail, the forecasted rain looked like it was looming, so we were keen to get started. The first section of trail through the Pikiariki Ecological Area bush is easy riding and really beautiful. There was a lot of birdsong and massive Rimu trees in here. After a few Km’s the trail enters an open forested area and it starts to climb Mount Pureora. 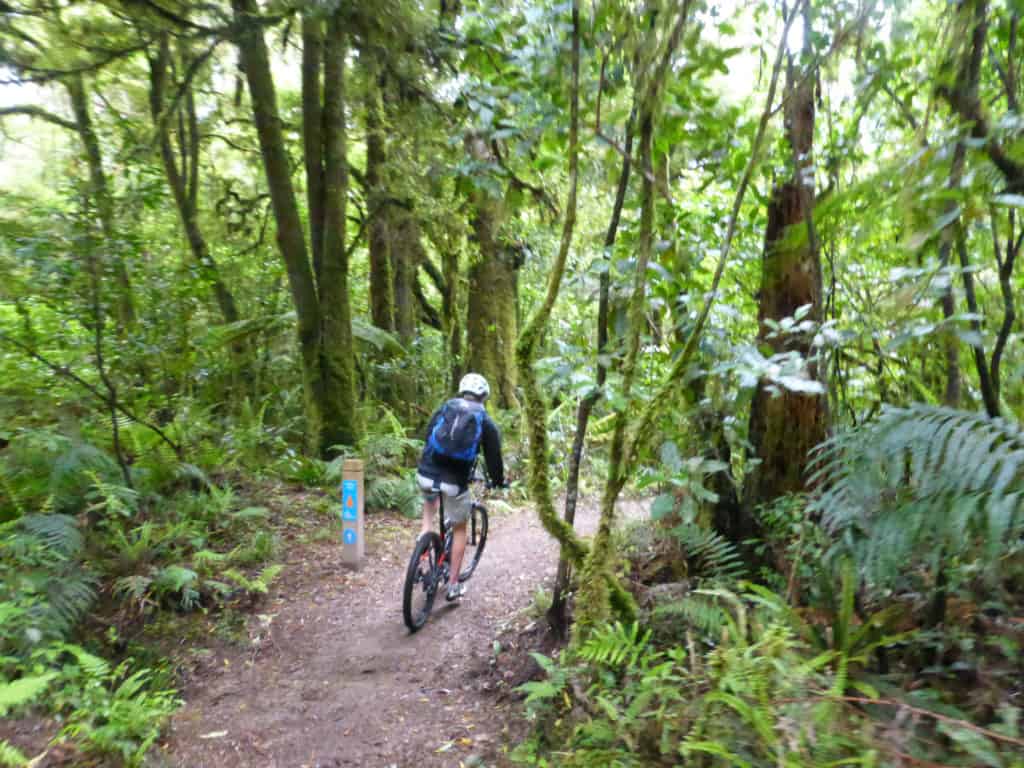 Riding through the beautiful bush

This is the beginning of the big climb of the ride about 6Km or so of good gradient climbing. From this open area into native bush and up into amazing cloud forest. It’s hard to figure out exactly where the top is, as the trail undulates a lot between about 10 and 14Km mark. The only thing that gives it away is a little sign along the way that says you’ve reached the summit of 940m. 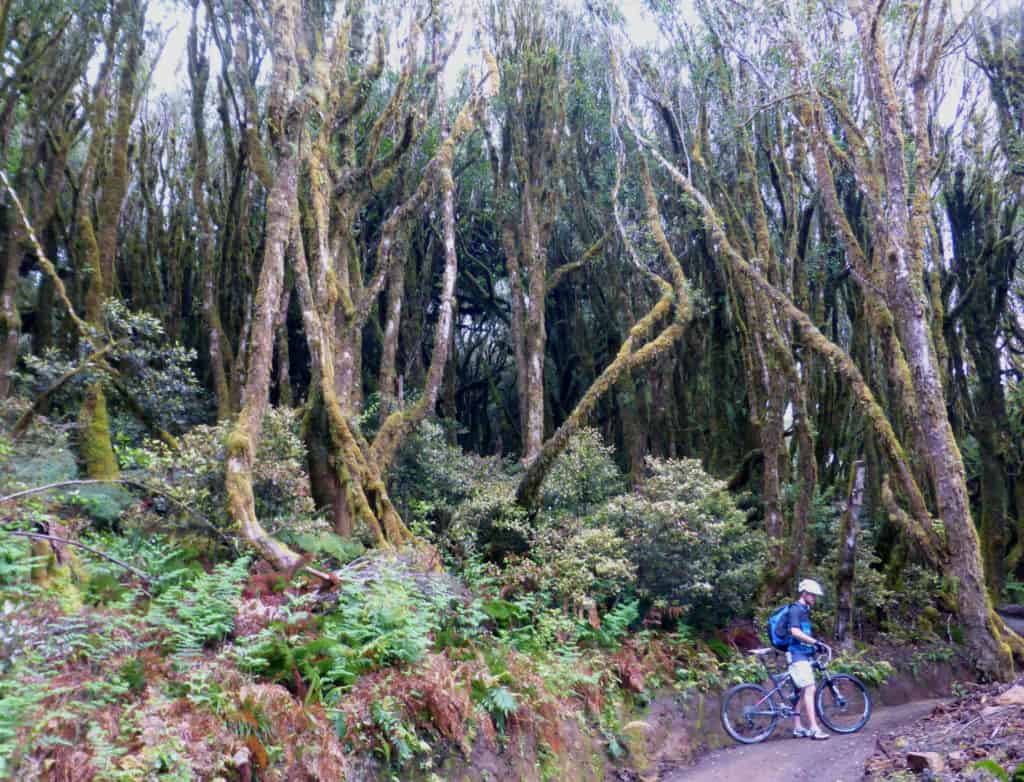 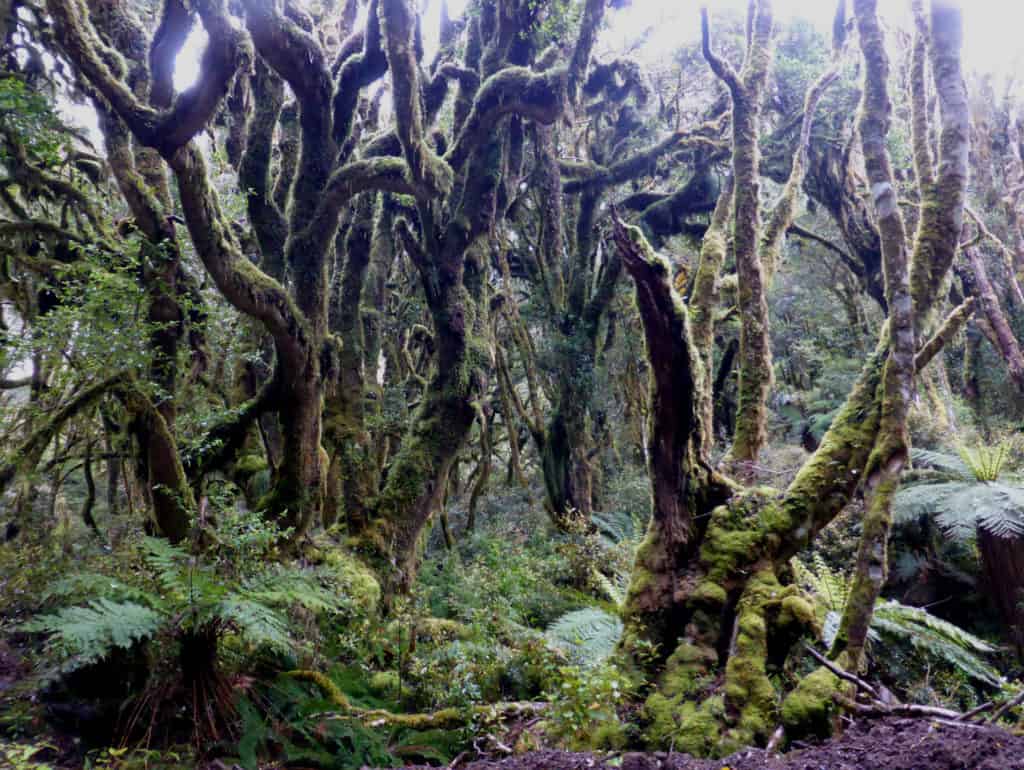 The moss covered trees in the cloud forest

We sneaked in a lunch stop somewhere along here in amongst the moss covered old trees, but it was pretty windy and cold up here so we were keen to keep moving. Not long after this, the rain came. And it really came down quite heavily!! However, the downhill single track started, so we were distracted from the rain for a while!

Considering that there had been some rain in the few days previous and the level of rain that we were experiencing, the trail wasn’t too muddy. Admittedly there were patches of muddy puddles to be wary off, but it was still fast and fun.

We got to the first of 2 swing bridges of the day. It was an impressive sight, with very long bridge exposed to the wind and the horizontal rain coming down the valley. Sean was the guinea pig and first across the bridge! And bless him, he stopped for photos and rode back again. Meaning that he got completely soaked and a little chilly! But even for the rest of us, who just rode across as quick as possible, got very exposed to the weather. You forget how protected you are riding in the bush! 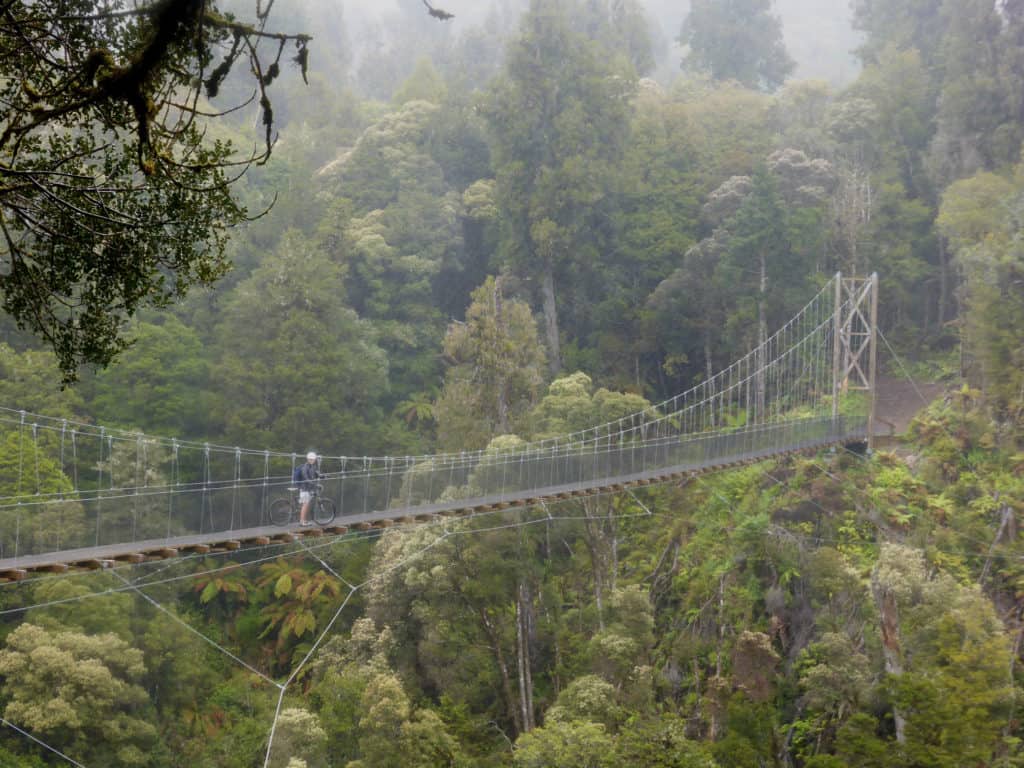 Between the downhill and the 26Km mark we got even more soaked and muddy!  So we decided to really ramp up the speed from here, because the warm shower, dry clothes and the beer at the lodge were calling!

The turn off to the Black Fern lodge is about 3Km before Piropiro flats campsite. Now the rumors were that it’s uphill to the lodge (and therefore downhill the next day) but it is not as simple as this!! On route to Black Fern Lodge

The 6Km to the lodge does seem to go on slightly, but it’s flat/undulating before crossing onto the private land and heading up a decent hill. There are some really cool signs and paraphernalia to keep you amused for this, before heading downhill to the road and then to the lodge itself. 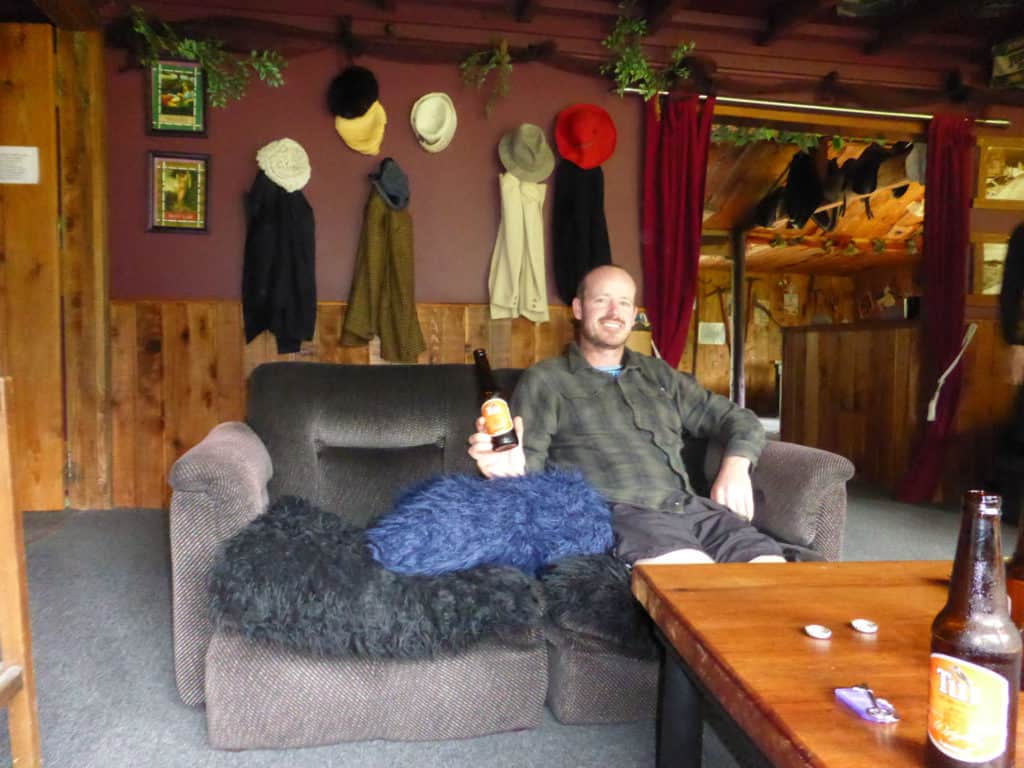 Having a well deserved beer at the Lodge The lodge is super cool. The location is fantastic. From the check in location, you ride along a pretty little riverside track for a while to get to the lodge itself. Again you’re really in the middle of nowhere, yes there is a road to it, but that is easily forgotten! The surrounding valley and bush is beautiful and there are just so may birds. The dusk and dawn choruses are a real treat. However for us on this wet and chilly day the cosy rooms, warm showers, cold beers and home cooked feed were the best treats!

Maria, the owner, cooked a scrumptious hotpot, dauphin potatoes and roast veggies. The way they do it is great and really suited what we wanted. Your dinner is pre-cooked and all you do is warm it up yourself whenever you want it. We loved this as we wanted a few beers first and to relax before having dinner later on. For a bit extra, Maria also leaves breakfast for you to help yourself at and also made us a tasty packed lunch (including home-made slices!). This is great as it means that you don’t have to carry so much stuff on day 1.

The next day there are two options, ride back up the hill in the forest or get a $5 shuttle up to the top of the hill. Our team did half and half! It took Sean and I about 15 mins to ride to the top so it wasn’t too bad and it warmed us up nicely for the downhill!

Back on the Timber Trail, you ride along some gravel road and trail before passing the flats campsite and passing the new lodge that is being build at the side of the trail. This is a lodge currently being built by a team of locals. It will provide some fantastic accommodation right onlongside the trail in 2017. Riding through pristine bush on day 2

Day 2’s fun really starts as the trail head back into native bush and up along the side of a valley. Here the bush and trail are cool. Climbing only for a short time, you get to some fast downhill sections, before getting to one of the longest swing bridges in New Zealand. The amazing Maramataha Suspension Bridge. We were thankful for the improvement in the weather and less wind and rain over this bridge! 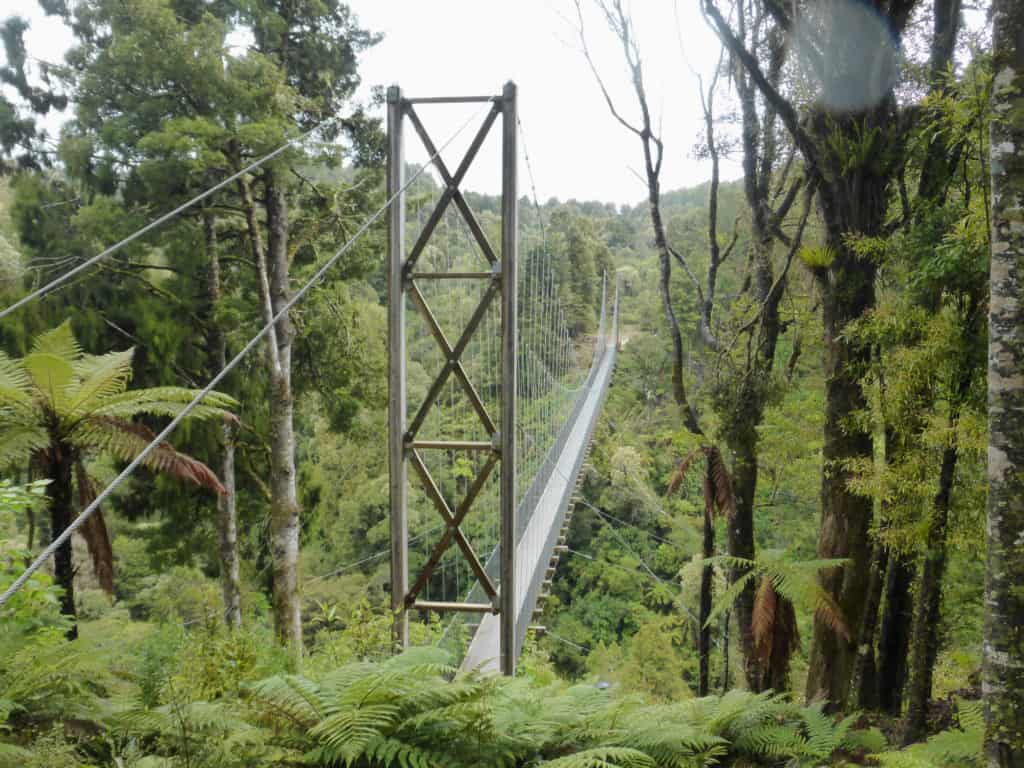 One of NZ’s longest suspension bridges Riding along the Maramataha suspension bridge

Next there is a few Km of gentle climbing before joining what was the old tramway line. From here the trail is undulating for quite a long time about 20Km or so. Post all the rain, there were some more muddy sections along here in the cut out sections of trail in the rock, but it was no big deal. Then the downhill fun starts again from the 67Km! Through the bush and opening up in places. At the 74Km marker you come to the Ongarue Spiral. This is a really interesting piece of the old tramway. This is where the tram had to drop in elevation and the designers came up with a tight spiral and tunnel to solve the problem. Today you can ride around the spiral and through the tunnel! Beware – it gets surprisingly dark in the tunnel!! Riding out from the Ongarue Spiral

Then there is a fast and pretty downhill, for a couple of Kms. Taking you to a gate, where the trail crosses one of the bigger forestry roads. It then heads back into forest, but this time pine forest as you near the end. Finally the trail traces the edges of farmland before popping out onto a gravel road at the end.

To get back to our car (which was parked in Ongarue village – this is the safest place to leave it) there are a few Kms of road riding back to the village, but no big deal, it’s really quiet and also nicely flat!

85Km of varied trail. Accessible for a grade 2/3 rider (just expect a little walking – especially in the wet) yet fun and rewarding for a grade 3/4 rider. Some easy riding, some grade 3, a good climb or two, cloud forest, big Rimu trees, fun downhills, some technical bits (especially in the wet), historic tramline, Swing bridges, native birds, remote quirky, cosy lodge and pristine rivers. What more do we want from an adventure ride?!

Throw back to those summer days hiking in our local native bush.

We will be hitting these trails again in the next week or so but this time running them 😳 and likely seeing a lot more mud!

I’ve only been running again the last couple of months and have been loving it.

Trail running on this type of trail is going to be tough, roots and uneven ground at each step but it is extremely rewarding and is somehow good for the soul 😊 ... See MoreSee Less

Adventurers Travel Company is in Puhoi.

Winter is officially here.
I suspect Mud Leggings are going to be a thing for the next few months! 🤣 @ Puhoi ... See MoreSee Less

Hi, I’m Rachel Howells, the owner and operator of Adventurers travel. I’m passionate about outdoor sports and activities, adventurous challenges – anything that involves the freedom and exhilaration of the great outdoors.