Adventuring to the Dark Side of Wairoa Gorge

The world class mountain biking trails of Wairoa Gorge are quite simply not to be missed on a trip to Nelson.

Previously owned by an American Billionaire, who luckily for us, loves mountain biking enough to spend several millions of dollars to have this valley converted from a forestry wilderness to a world class trail destination.

Now managed by the (awesome) Nelson Mountain Biking Club and soon to have ownership handed over to DoC it is a downhill mountain bikers dream. (The Billionaire decided after doing all this work, to give this valley back to the New Zealand people – how amazing is that!).

The trails were built by teams of the best trail builders, who had plenty of time to perfect each individual trails style, flow and gnarlyness. The result is a network of unbelievably fantastic trails. With features that elsewhere maybe an intermediate rider wouldn’t ride, or at best, stop, look at and then debate about (at least if you’re a Rotorua Grade 4 rider like me!). Yet here, you can ride them and feel confident that the exit of the feature is designed well and will likely get you out of it and rolling onwards.

People say here “trust the trailbuilders” – a scary thought maybe, but you get to understand why they say that after a day of riding here.

The trails are ~800/900m of descent and generally it takes between 35-45mins to get down the Grade 3 trails, if you are intermediate! AND there are 6 shuttles during the day. So I guarantee that unless you are super downhill fit, you’ll feel like you’ve done a massive workout by about ~run 3! 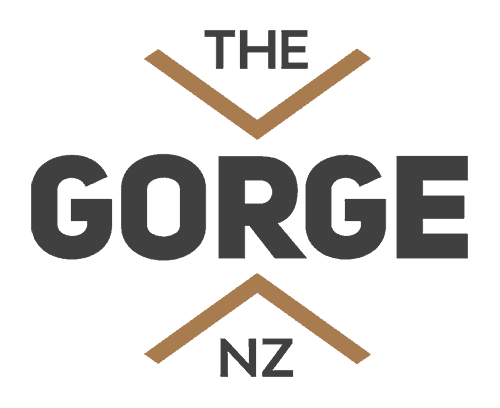 Learning to “trust the trailbuilders”!

My Wairoa virginity was popped only recently at the start of our recent South Island Biking Tour. I have to admit I was nervous! My partner Sean had ridden Wairoa Gorge previously and all I’d heard about for weeks afterwards was how amazing it was, and he kept saying don’t worry about it, you’ll be fine, you’ll love it. However, I couldn’t help but basically be shit scared. Mainly because I’d heard it was technical, because I’d likely be riding in a group of people I didn’t know, because there is a shuttle schedule and I was worried that I would be too slow to meet it and then make everyone in my riding group miss it…. Etc etc.

I ride Grade 4 trails in Rotorua, fairly confidently, but we don’t have quite so many rocks there. And even though I am used to natural trail and adventure riding throughout New Zealand, I hadn’t considered myself a confident grade 4 rider in Nelson or indeed to have the ability to really get the most out of a day at Wairoa Gorge. 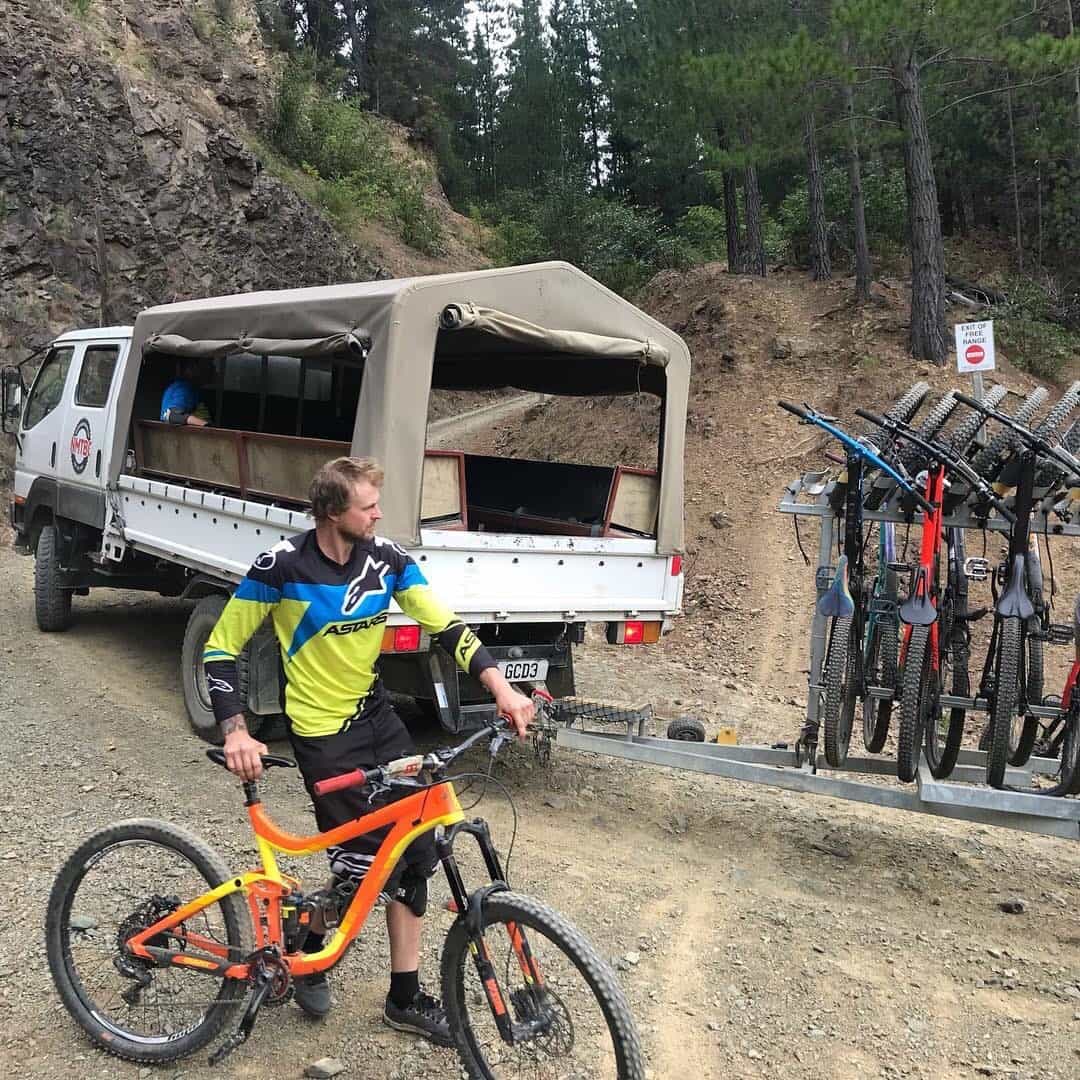 However, my first day at Wairoa Gorge was epic! We did what is considered to be the usual starting trails. Bermed As, being considered a Grade 2 here, which feels like a Rotorua grade 3!

The next run encompassed one of the most popular sets of trails, Creamed Rice and MPD and Kurtology, all Grade 3 trails and just unbelievably awesome. Creamed Rice is a flowy techy trail, yep I know, how can it be flowy and technical you ask? But it is! It has some good drops on it and some rocky gnarlyness but is fairly easy to ride and what shocked me, fairly easy to ride at a descent pace. I did come out of it thinking ‘wow, I’ve just done the biggest drop I’ve ever ridden – without stopping to look at it!’ But that just gave me more confidence for the day.

The very cool thing about Wairoa Gorge is getting to know your fellow riders, that is both within the group you’re riding in and the other groups you mix with during the day. Everyone is so super stoked to be there that the atmosphere is uniquely energetic and excited. Very different to say catching Gondola’s at Skyline Queenstown!

People are also chilled out about skill level, if you need to change groups or want to join another group to ride a different trail, it’s not an issue. Everyone talks about what trails they’ve done, planning to do. It in no way feels elitist or competitive, everyone is having too much fun for that bullshit! 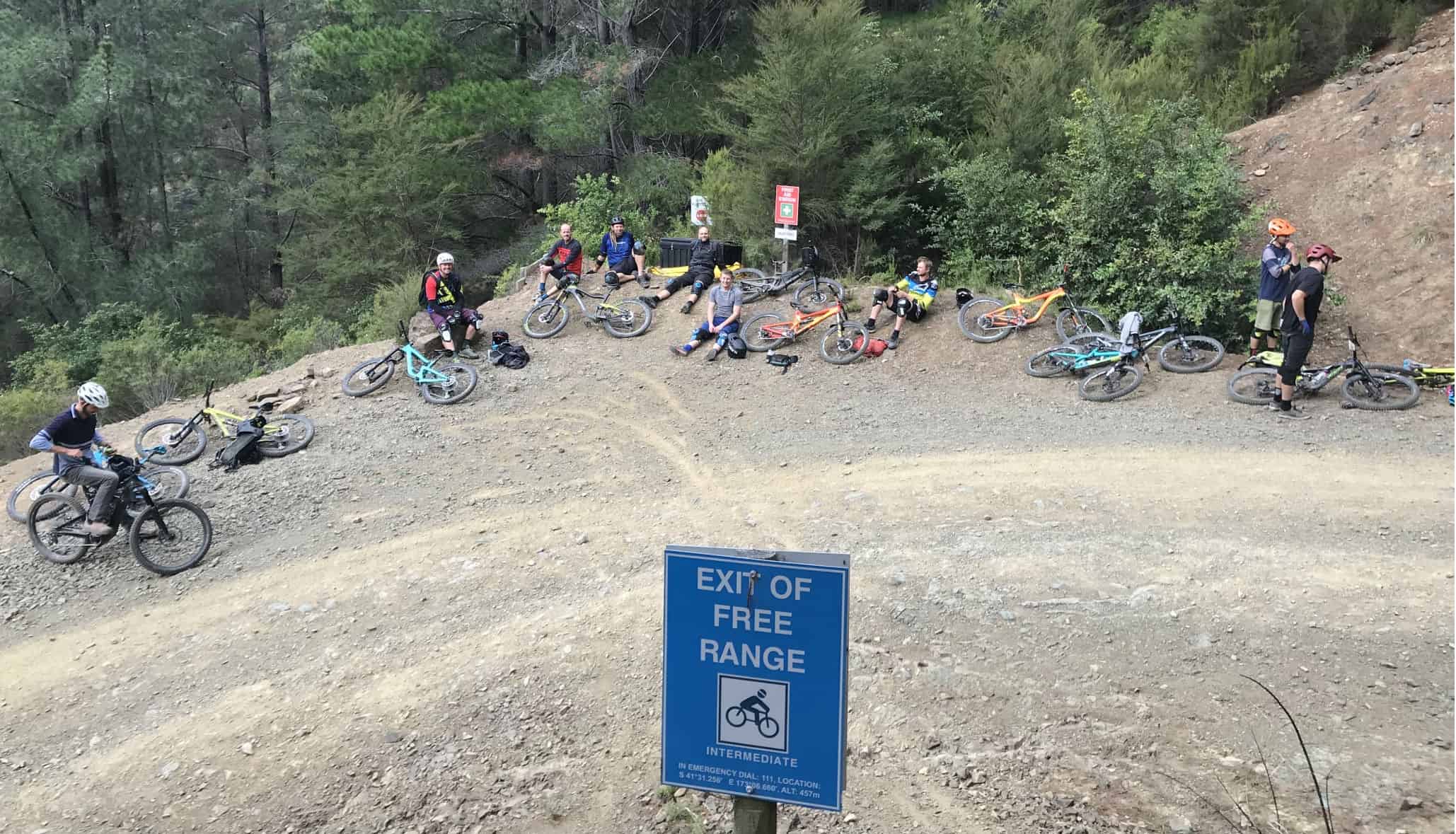 My Journey to the Dark Side

At lunchtime during our first day Sean being Mr Confident suggested we ride a few of the trails on ‘The Dark Side’. Now this sounds scary enough in itself, until I realised they were Grade 4 trails and the reason they call it ‘The Dark Side’ is because there are no ‘get outs’ to the road on this side. Meaning that if you take more than (in our case) 50mins to get down to the bottom then you miss the shuttle and if you don’t want to ride it, it’s a long walk down!

DMT and Red Line was our intended route, and we set off surrounded with an air of nervousness. But wow how we were rewarded for our courage to take on the dark side!

For me these trails are hard, they are at the limit of my abilities, mainly because there are Nelson grade 4 rocky features on much steeper trails than the other side. Some of the features you ride up onto a rise and you can’t see what’s on the downside. This is quite unnerving, but on these grade 4 trails there are always rideable rollable features on the other side – you just need to trust the trail builders remember!

This initial run of the dark side grade 4’s saw me get off the bike at least 4 times, but I absolutely loved it. I was so stoked that I rode most of it AND we got down the bottom 5 mins before the shuttle left! Phewff!

On our second visit to Wairoa Gorge, a week later, we were with 3 friends from North Island. I had spent the whole week deliberating whether I would have to courage to go back to The Dark Side a second time, this time knowing what was ahead of me! However, the level of our group meant that the decision was out of my hands as we opted to stay on the main side. It turned out to be a bonus for me though, as multiple runs of Jumanji, Creamed Rice, Mundy meant that I could ride them better and faster. I was even 2nd in the order of riding most of the day, which I was super stoked about, as this wouldn’t normally be the case with this team in Vegas.

So leaving the valley a second time, I left loving the place even more and feeling super confident. However, both of us with unfinished business on The Dark Side!

This of course meant that we would need to detour on our way back up South Island and stop for a weekend in Nelson to come back to Wairoa! Being later in the year, it was now May and the mornings were colder with a mist and dampness in the air.

A nervousness of wet roots and rocks set in during the first few mins of the first run, but thankfully the trails were running beautifully. We picked our 2nd run to be DMT on The Dark Side. This gave us 1hr to get down.

The first part of DMT is flowy, with tight switchbacks (which amazingly I was riding!) the features are short and steep. I rode this part well and I was really happy with myself as the nerves began to subside. Then there is a short section of a grade 5 that you have to ride to get onto Lower DMT, this part is the hardest, much steeper and tighter switchbacks, yet I managed it fine. The problem for me came a bit later with a silly mistake, coming over one of the blind rises I was too near the bank and going too slow to ‘huck’ it, my front wheel hit a rock sticking out the bank and the bike stopped dead, I went over the old handle bars and landed (luckily) on a non rocky part of the track. Only to have the bike whack me on the back of my head a very long second later!

Both me and the bike were fine (extremely glad of my full faced helmet at this point), but my confidence was hit hard and I scratched away at the rest of the descent. Frustrated with myself and a little shakey, I found myself making more stupid mistakes and not really enjoying the rest of the trail.

Sean on the other hand was flying and had had such a brilliant time, he just wanted to do it again! Being now more nervous and generally a little “square”/ sensible, I wasn’t initially keen to do a second run. But having time on the shuttle allowed me an opportunity to consider and think, I’m here now, this is what I’ve been looking forward to, I can do it, I just need to get on and do it!

So the second run was much better. I’d pulled myself together and got some confidence back. I made it round all the tight switchbacks (yes!) and did not get off my bike once! It’s amazing what a positive attitude can do. [My Strava tells me I’m the 7th fastest woman down DMT upper/lower and Red Line… and I ain’t fast….but there are only 17 ladies who have done it – I’m hoping that’s because most ladies don’t Strava their Wairoa Day!) What Wairoa Taught Me

Wairoa has taught me a lot about my downhill biking. Firstly I surprised myself with my level of skill I had, and secondly how bloody important having a can do attitude and confidence is. Before arriving at Wairoa I thought the place itself would make me feel less confident, with all these more skilled and faster riders there and everyone going super quick. But I have to say the place has done the opposite, it has really helped me to grow in terms of my downhill biking, both in terms of skill and confidence. And the people riding there help to do that as much as the trails themselves.

Needless to say, we’ll be back for more very soon!

My advice to anyone thinking of going to Wairoa Gorge but worrying about whether you’re good enough on the downhills or you are just a little nervous of the new situation, is the following:

Adventurers organises custom mountain biking holidays throughout New Zealand. You talk to us about what kind of riding you enjoy and what your fitness level is like and we create an awesome mountain biking itinerary for you. Full holiday itineraries, long weekends and 1 day adventures. Contact us here for more info.

Adventurers Travel Company is in Arrowtown.

Hi, I’m Rachel Howells, the owner and operator of Adventurers travel. I’m passionate about outdoor sports and activities, adventurous challenges – anything that involves the freedom and exhilaration of the great outdoors.