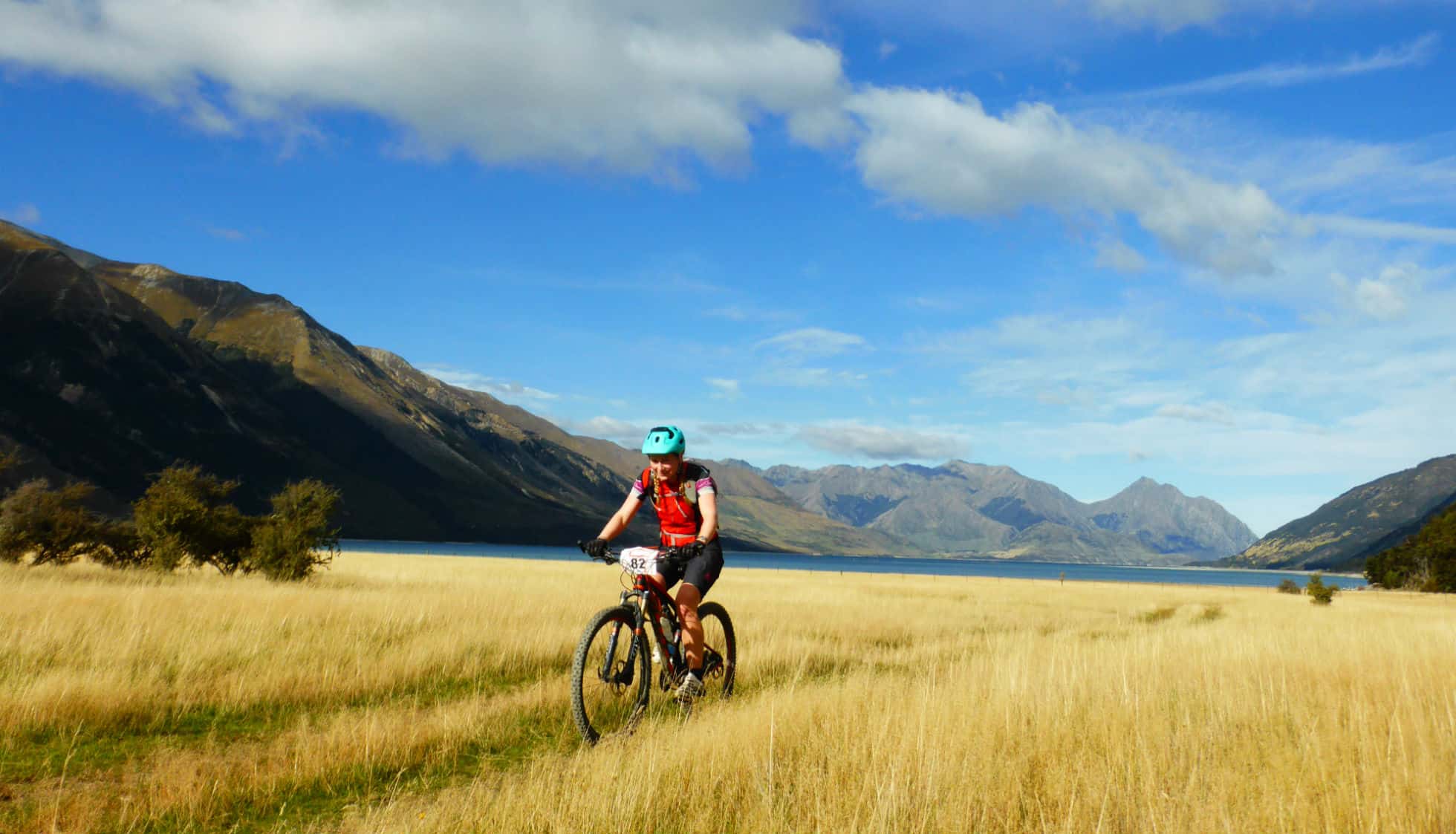 So it begins, on a dark, cold, windy and nerve racking start line. The Epic race, and the 125Km around Lake Hawea await. 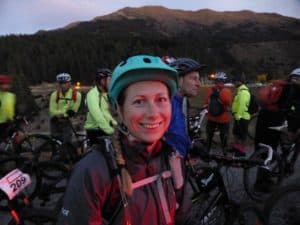 Adventurers @ the start of The Contact Epic Lake Hawea Race

Starting from the Lake Hawea dam the first 30km is on tar sealed road, it’s fairly flat (as ever minus a few hills!) but for us it was already a battle with a battering head wind in force! So we found our pace, settled into a group and rode. Mentally I found it a challenge, but the sunrise that appeared to the East lit up our way and gave me a glimpse of the beauty of what was to come!

Turning off from the tar sealed track we start riding off road… for pretty much the next 95Km. The track takes us to a DOC camp ground, where there were some enthusiastic supporters cheering us on! It’s flat for a little bit but then it the undulation starts. We track by the side of the lake, high up and low down, crossing through the numerous icy cold river crossings, into the persistent head wind…. 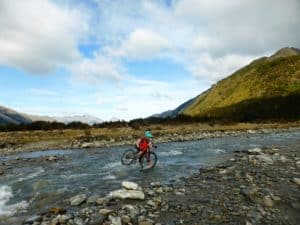 One of the many icy cold river crossings

I found it tough at this point, my feet were numb, my leg were feeling it. I tried to remember why I was here and that I am capable of more than I think I am. This race for me was not particularly a race, it was to get out and ride the longest distance I’ve ridden, in outstanding surroundings along tracks that aren’t normally open to the public. So it was my own personal challenge! 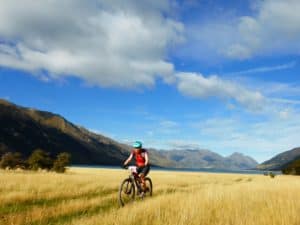 Into the head wind through beautiful meadows 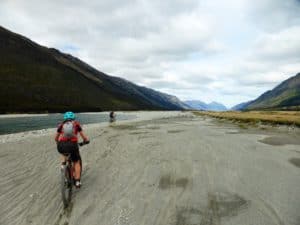 Almost at the turn around point of the main river crossing

Eventually we reached the end of the lake and continued to the Hawea River crossing point. Good for three reasons… 1) it was the turnaround point 2) we would then be riding with a tail wind and 3) the aid station was within reaching distance!!

The Hawea River crossing was (for me) almost waist deep! and just a little bit chilly! But such an important place in terms of my motivation and my believe in being able to finish this race! For here on in, all of a sudden I knew I could do it. 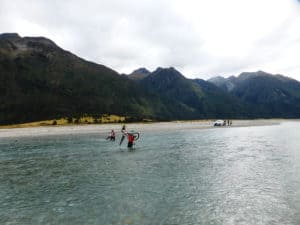 From the aid station, the undulation starts again! Following high up above the lake now on Dingle Burn private land, we continued. The hills all of a sudden got steeper and more dramatic! They were tough, no escaping it. But I was determined to ride everything I could technically ride up! It was hard but somehow knowing that I was on the way home helped me keep riding well!

One of my favourite places along the race was the unofficial aid station between the turnaround point and Dingle Burn Station, these two volunteers provided water and electrolyte and chatted away to us whilst we topped up and recovered. Very motivating, thanks guys 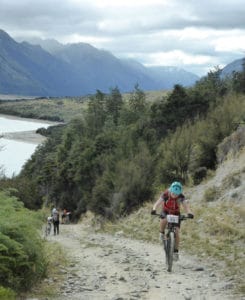 Toughing it out on the steep roller coaster of a track 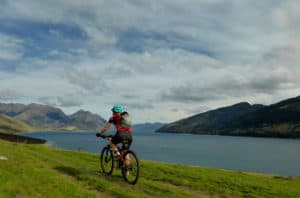 It was a long way to Dingle Burn Station. No sugar coating it. But what a beautiful place, nestled slightly inland from the lake up a tributary valley and behind a ‘little’ mountain sheltered from the winds, the station is a historic station, which has been farmed since the late 1860’s. Normally inaccessible to the public, but today providing the hardy rider with indescribably good tea and scones!! Yes – Tea and Scones! With cream!

Thank you Dingle Burn Station and the Contact Epic volunteers, for this, it’s an absolute life saver, a highly motivating thought when riding towards the station and a real boost for the last 25 odd km back to Hawea.

The sand-flies (and in my case my partner) didn’t let me stop for long though….and the start of the end begins. This part of the ride is probably the most striking. The gravel road is cut into the rock face and teeters on the edge of the lake. It gives way to some impressive riding. I spend a lot of that riding time soaking it all in, this amazing place on such an impressive road, and hitting my first 100Km on a bike! 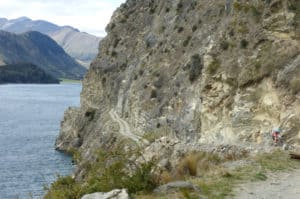 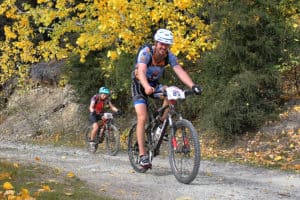 Adventurers together, one suffering a little more that the other!

Reaching the tar sealed road was a joy, it meant there was only 5Km to go! But oh yeah those 5Km weren’t easy! The head wind was even more vicious than this morning!! I was very happy to reach the finish line, exhausted but very proud of myself and stoked that we’d had such an amazing day.

We reached the Contact Epic finish line at 9hrs and 20 mins…. A long day in the saddle. I was happy with this, I wasn’t racing for an amazing time, I was racing for my goal of riding my first 125Km. What an Epic race!! 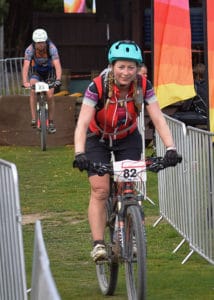 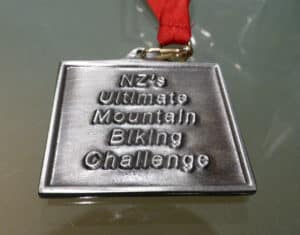 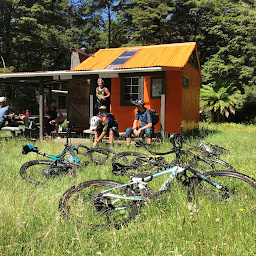 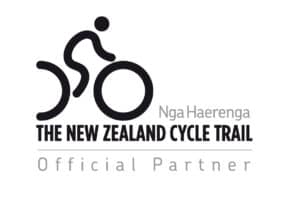 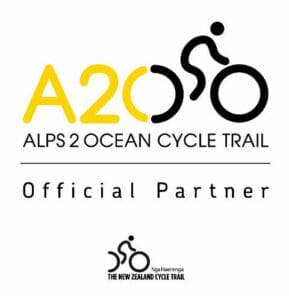 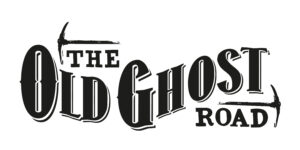